FG to spend N10bn on out-of-school children in 5 years,says Minister

FG to spend N10bn on out-of-school children in 5 years,says Minister

ABUJA–THE federal government, yesterday, revealed that it would spend an estimated N10  billion in five years to mop up out-of-school children in the country.

The revelation came as government said it was making efforts at descending heavily on some primary and secondary schools considered not living up expectation in terms of educational standard.

Minister of Education, Mallam Adamu,Adamu,speaking at a two-day retreat for state commissioners, Permanent Secretaries, chairmen of State Universal Basic Education Boards,SUBEBs, directors and heads of Parastatals and Agencies in the education sector,explained that government had set up a target of five years to mop up the over 10.2 million out-of-school children in the country  with the estimated amount.

I want to be remembered for transforming education in Edo State, says Obaseki(Opens in a new browser tab)

Adamu,whose statement was contained in his Education Sector Short & Medium Term Blueprint/Work Plan on the implementation of Education for Change: A Ministerial Strategic Plan (MSP),he presented to education stakeholders at the event,regretted the high rate of out-of-school children in Nigeria. He noted that most of them were almajiris, girls,internally displaced persons, orphans and vulnerable children.

He mentioned some of the strategic actions to be carried out within the period to include sensitization of traditional rulers and religious leaders on the need to inform their communities of the benefits of formal education.

While urging the lawmakers to increase allocation to the education sector, he called on the State Governors to invest more in basic education as well as prompt access of the Federal Government matching grant from the Universal Basic Education Commission.

According to the details contained in the document presented to the stakeholders by the Minister, by the end of 2020, about N3 billion would have been committed by 19 states, outside the intervention of the Federal government, in ensuring the enrollment of over 2 million school-age children that are not in school.

In his presentation at the event, the Permanent Secretary, Federal Ministry of Education, Arc Sonny Echono, underscored the directive by the Minister that two million school-age children be taken off the street every year for the next five years, would be taken seriously.

He disclosed that the 2018 National Personnel Audit of Primary schools in Nigeria showed that 10,193, were out of school.

“The above followed the assumption that there would no new out-of-school children in these five years. All the children of school age will automatically enrol in school, following the compulsory years of schooling as enshrined in the UBEC Act,” he said.

According to him,the retreat was organised by the ministry for both stakeholders from federal and states to brainstorm on key areas of the Ministerial Strategic Plan for the education sector, bearing in mind that education is on the concurrent list.

He said it was also to correct the situation in the past where states accused the Federal Government of not carrying them along on policy issues while the Federal on the other hand blame states for not buying-in into its programmes.

The Permanent Secretary also told stakeholders at the event that there would be no going back on the December 31, 2019 deadline to remove all unqualified teachers from the classrooms in Nigeria.

He said it was expected that anybody who wants to remain in the teaching profession, should register and get certification by the Teachers’ Registration Council of Nigeria before January 1, 2020.

Echono, frowned at the practice where some private and state governments recruit quacks to teach in schools, saying the government has commenced collation of data of all qualified teachers state by state, to be made accessible to all of
stakeholders for employment.

On the strengthening of quality assurance, he disclosed that the Federal Government would soon crackdown on all substandard primary and secondary schools nationwide.

Deputy Chairman, House Committee on Education and Services, Honourable Ifeanyichukwu Ibezi, urged stakeholders at the retreat to review and reflect on the content and quality of education he noted “the Nigerian child is currently receiving.”

Rochas Okorocha to Spend N1 billion on out of School Children 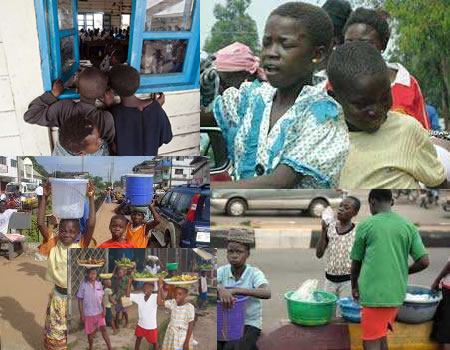 UNICEF says 2m children out of school in Yemen

UNICEF says 10.5m children out of school in Nigeria

UNICEF commences enumeration of out of school children in Adamawa