Prominent Hong Kong pro-democracy activist Joshua Wong has been barred from running in local district council elections after an official said his calls for “self-determination” in the territory were inconsistent with pledging an oath of allegiance to the city and its constitution.

Wong, who has been arrested twice since mass protests in the city began in early summer, is the only candidate to have been disqualified from the Nov. 24 poll on grounds of his politics.

The district-level polls have been especially heated this year as pro-democracy candidates look to capitalize on growing dissatisfaction with Hong Kong’s government to win more seats from pro-Beijing incumbents.

But an election official notified Wong on Tuesday that his nomination as a candidate had been ruled invalid, according to a copy of the letter Wong posted on his Twitter account, dealing a blow to a protest movement that has galvanized mass anti-government demonstrations over the past five months.

“It proved how Beijing manipulate the election with political [censorship] and screening,” Wong said on Twitter.

A government statement issued later explaining the decision did not mention Wong by name, but said: “The candidate cannot possibly comply with the requirements of the relevant electoral laws, since advocating or promoting ‘self-determination’ is contrary to the content of the declaration that the law requires a candidate to make to uphold the Basic Law and pledge allegiance to the Hong Kong Special Administrative Region.”

Answering an earlier query from the elections official, Wong stated that he and the Demosist? movement he belongs to “do not promote and support independence as an option of self-determination.”

Wong, now 23, first emerged as an activist leader in a 2011 student-led movement opposing “moral and national education” curricula that many Hong Kong residents felt portrayed the Chinese Communist Party too positively. The curricula were indefinitely shelved.

He later helped spearhead the 2014 pro-democracy “Umbrella Movement,” demanding direct elections for Hong Kong’s chief executive after Beijing decided to maintain its control over how candidates are selected. Earlier this year Wong was jailed for charges related to the 2014 protests, but he was released in June.

Wong and other activists have been barred from standing for elections in the past, but so far this time he is the only candidate to be barred.

Wong’s disqualification comes as Hong Kong Chief Executive Carrie Lam on Tuesday reiterated her pledge not to negotiate with “rioters,” accusing the protesters of “finding excuses” to cause chaos, according to the South China Morning Post.

Lam said her government was taking measures to counter a technical recession, blaming the frequently violent protests for dragging down Hong Kong’s economy.

Although the protests have gained steam only since June, she pointed to “negative economic growth” for the whole of 2019, compared to 3% growth for 2018.

“For the government to resort to measures that will appease the violent rioters, I don’t think that is the solution,” she told reporters.

“To get to the root of the problems, we must stop violence and let calmness restore in the city,” she said.

Hong Kong: Beyond the pale of chaos 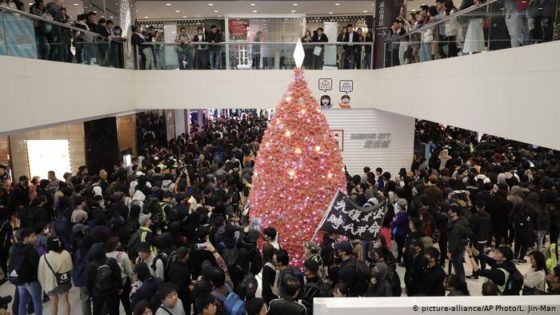