A SPLINTER group of Ohanaeze Ndigbo has emerged with its sponsors claiming that it was already registered with the Corporate Affairs Commission, CAC.

But the Chief Nnia Nwodo –led Ohanaeze described the group as being sponsored by enemies of Igbo to destabilize the apex Igbo socio-cultural organization.

This came as the protagonist of Biafra Independence Movement, BIM, Chief Ralph Uwazuruike, has apologized to  Igbo elders, Christian and Muslim leaders, for the unprintable remarks constantly rolled out from the Nnamdi Kanu controlled Radio Biafra in London.

The splinter group of Ohanaeze, led by the traditional ruler of Igbariam in Anambra East local government area of Anambra State, Igwe  Nkeli Nzekwe inaugurated  the new group in his palace and described himself as the chairman of Board of Trustees of Ohanaeze worldwide.

According to him, the import of the inauguration was that Ohanaeze had become a legal personality that could sue and be sued and no longer a self-serving platform, adding that henceforth, the new leadership would pilot the affairs of the Igbo organization to the exclusion of anybody  on the saddle before the incorporation of the group.

“As the chairman Board of Trustees of the organization, I call on Ndigbo all over the world to join hands together and make Ohanaeze great again.

“I am  one of the founding members of Ohanaeze Ndigbo in 1976. After the Nigerian civil war, I and some Igbo patriots came together to discuss the way forward for Ndigbo with the good intention to unite our people under a common umbrella body.

“This initiative was welcomed by our people considering the maximum displacement of Ndigbo during the war and its aftermath. Our principal aim then was specifically to unite Ndigbo and speak with one voice.

“It was unfortunate that the organization later lost its principal focus and degenerated to a political tool in the hands of some greedy politicians which created room for the formation of several Igbo organizations due to lack of confidence in the affairs of Ohanaeze.

“On the 25th of November 2019, some notable Igbo stakeholders visited my palace to discuss the way forward on how to restructure Ohanaeze Ndigbo and give it a corporate legal status instead of merely existing as a pressure group and a political tool in the hands of few individuals.

“Throughout the 44 years of the existence of the apex Igbo group, it was  neither  registered  at  the Corporate Affairs Commission, nor recognized by some notable international bodies as a corporate personality..

,”I am glad to announce to the general public that Ohanaeze Ndigbo General Assembly is now registered with the Corporate Affairs Commission with the RC NO: 144918, under the present leadership of Barrister Basil Onyeachonam as the President General. The organization is recognized by the Charter of the United Nations and the Universal Declaration of Human Rights.

But reacting on the development, the President General of Ohanaeze Ndigbo, Chief Nnia Nwodo described the action of the group as a failed coup.

Nwodo, who spoke through the Anambra State President of Ohanaeze, Chief Damian Okeke-Ogene said Igbo  people were too wise to be deceived by a group of fortune seekers.

He observed that the new group was being used by some politicians to cause disaffection in Igbo land, adding that the  Nwodo-led Ohanaeze Ndigbo was able and intact.

He said: “Ohanaeze does not need such registration the group is talking about to function as an entity. The Igbo group has been in a existence before most of these boys were born.

“The young men are just being used to create confusion in Igbo land. The chairman of our BoT remains the Obi of Onitsha, Igwe Nnaemeka Achebe. All the eminent Igbo leaders are in Ohanaeze: Chukwuemeka Ezeife, Prof Ben Nwabueze, SAN, South-East governors, among others, are in Ohanaeze Ndigbo.”

Ohanaeze warned the group to stop the part of destabilization they were treading on against their people , describing Igbo as a united front.

According to him, the group knows that it would be a difficult task for it to lure Igbo leaders, like the Obi of Onitsha, former governor of Anambra State, Dr Chukwuemeka Ezeife, constitutional lawyer, Prof Ben  Nwabueze SAN, among others, to key into their devilish plan.

He said the governors of Abia, Anambra, Ebonyi, Enugu and Imo States in the region were too big for the group to deceive.

“What they did was a non issue; they are a bunch of jokers and they have no such capacity to destabilize the strong Igbo presence that had been in existence before they were born. Ohaneze is intact “ Okeke -Ogene said

According to Uwazuruike,  “if an independent Biafra will not guarantee  freedom of religion, to hell with it.

“I sincerely wish to apologize to everyone that has been affected by the incessant insults , abuses and blackmails from radio Biafra, London broadcasts or any other Biafra news channels.”

While acknowledging that he founded the Radio Biafra London and trained everyone that is fighting for  Biafra today, either directly or indirectly, Chief Uwazuruike also accepted that whatsoever sin they have committed in the course of this fight, he (Uwazuruike), “is the one to be held responsible”.

He described as “most unfortunate” that one of his “trained directors is using the radio as a platform to insult and blackmail Igbo elder statesmen like Chief Pete Edochie, Chief Nnia Nwodo, the Church and Muslim leaders”.

Explaining why he floated the London based radio station, Uwazuruike said it was  “to propagate the Biafra struggle and the  senseless killings and marginalization of Igbo Christians in Nigeria to the world.

“It was these wanton killings of Ndigbo in Nigeriathat  made me to start the agitation for Biafra in September 13, 1999. The struggle is still alive and in no distant time, Biafra will be a sovereign independent state because this movement has made tremendous achievements”, Uwazuruike said. He regretted that none of those who engaged in insulting our illustrious sons on social media platforms were  born  during the Biafra-Nigeria civil war.

Crack in Niger PDP ahead of congresses 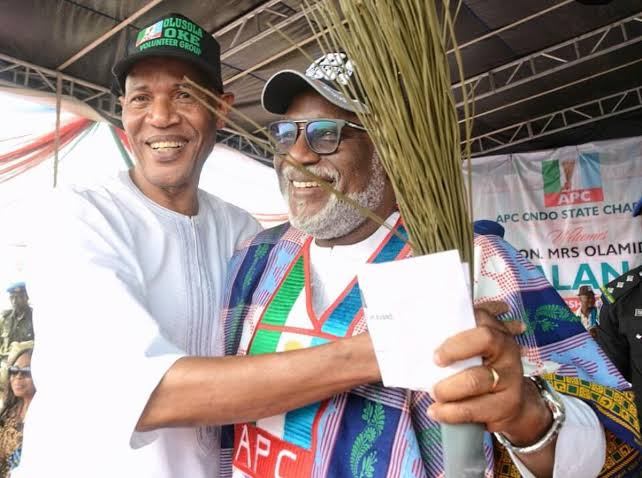 Edo election: Details of Buhari’s meeting with Ize-Iyamu, others emerge

Ohanaeze commiserates with Afenifere over Pa Fasanmi demise, says it is a blow to Nigeria democracy